Later this month, Cincinnati local artists will start giving 24 Metro bus shelters, downtown and in Over-the-Rhine, a face lift. Back in January the Cincinnati City Council voted to ban advertising on public right-of-way. The idea was to get rid of the garish billboards and bus stop bench advertisements. The unexpected consequences of this is that all Metro Bus shelters were required to remove all advertising, leaving the bus shelters barren and unsightly. In the end the decision caused the unintended effect of leaving the downtown shelters without advertising, but looking abandoned. Spots where the old bus benches had set are now  just scars on the sidewalk. In the end, Downtown Cincinnati Inc. (DCI) found that most folks had a negative perception of safety around bus shelters. 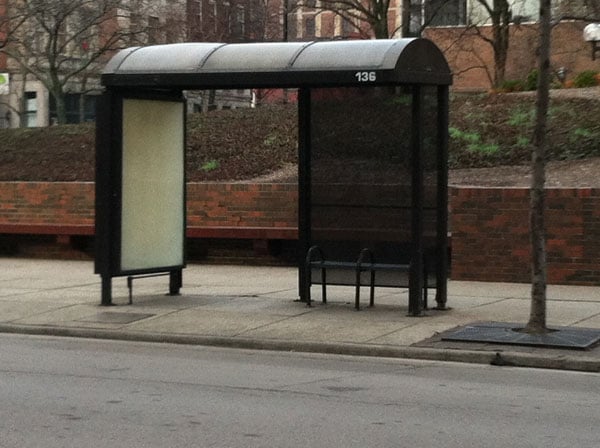 In steps ArtWorks and the Southwest Ohio Regional Transit Authority (SORTA). Instead of seeing this as an aberration they saw this as a grand opportunity to do something new and unique. Starting later this month Cincinnatians downtown will begin to  re-purpose this old space with the help of local Cincinnati artists. 24 of the bus shelters in Downtown and Over-the-Rhine will receive new murals representing works of literature.

“Through this collaborative partnership between ArtWorks, SORTA, the Main Library and DCI, these 12 bus shelters will receive a playful facelift and add to the public art vibrancy in our Central Business District,” explained Cait Barnett, marketing manager at ArtWorks.

Barnett went on to say that SORTA will clean and paint the shelters and the lead artist for ArtWorks, Ryan Little, and youth apprentices between the ages of 14 and 21 will design graphic prints for the empty spaces.

The 24 literary works that will be the themes for the bus shelters were voted on by the community through a survey conducted by the Public Library of Cincinnati and Hamilton County through June 30. They include:

The Metro Art Shelters project has also been championed by the Downtown Residents Council (DRC), which is hoping to raise $5,000 for public art throughout Downtown. Those interested in giving to the project can do so through the DRC’s power2give webpage.

According to ArtWorks, all donations will be matched dollar-for-dollar by The Johnson Foundation.