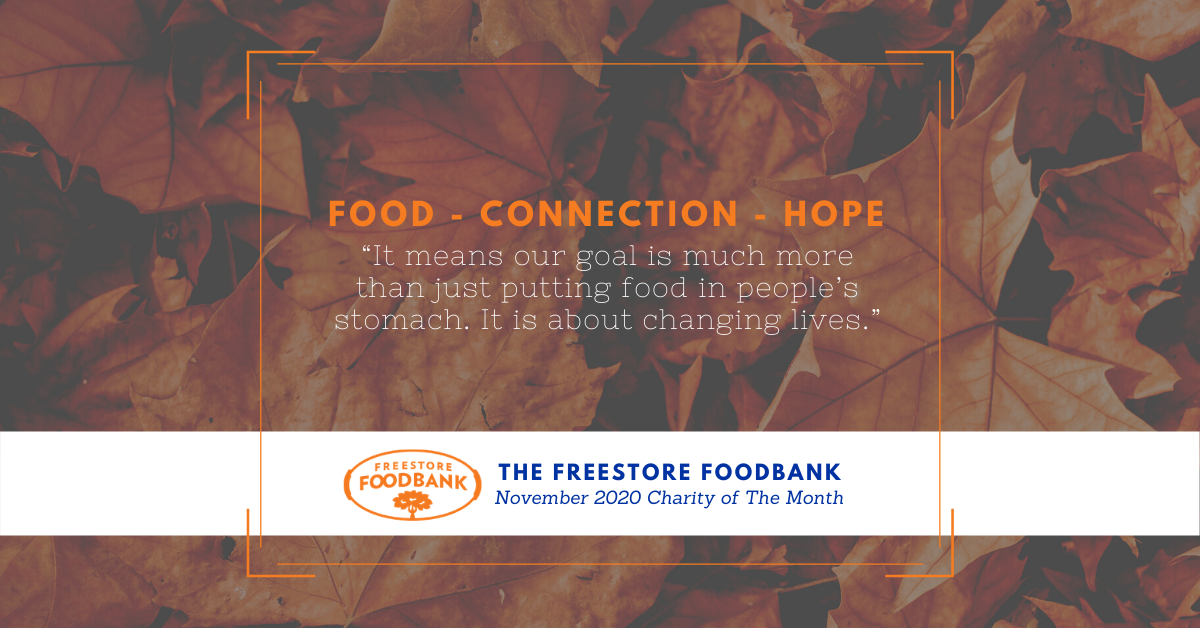 We’re one holiday into the holiday trifecta. The next one, Thanksgiving, is the one where a magical thing happens. People start to realize the gifts they have been given, as well as, realizing that there are many people who haven’t been so lucky. While our charity of the month selection is one that is around all year we wanted to help them provide a little bit of extra sparkle this holiday season to those in need.

More than 100 employees comprise the Freestore Foodbank team. The common goal among them is solving hunger in the Tri-State Area. Every year, 20 counties in Ohio, Kentucky, and Indiana are supplied with 33 million meals from the organization..

In 1971 Frank Gerson started The Freestore Foodbank. He saw dozens of household items being tossed away. As a result, he started to collect them to pass out to individuals who needed them the most.

Mission and Vision of The Freestore Foodbank

They accomplish their mission and vision by partnering with a variety of corporations around the tri-state. Thus gaining access to resources that allow the organization to provide nutritious food. Not only that, but they also connect the individuals to other support networks to take them from any type of crisis to a stable life

Every year the Freestore Foodbank hosts an event known as The Taste of the NFL. Due to a certain virus that has continued to spread rapidly, they had to create a virtual replacement! Until November 22nd, You can participate in a virtual auction, raffle, and virtual food drive.

Throughout the month of November 2020, $0.75 from every order on frameusa.com will go to The Freestore Foodbank. In addition, You can add a donation if you’d like on our checkout page

Offering picture frames, posters, art and more for over 30 years! www.frameusa.com has a great selection, low prices, fast delivery and friendly staff. At Frame USA, we champion our craft. We make all of our art, frames, and more inside our warehouse. All wood frames produced from Frame USA are 100% made in America! We take great pride with that because not only are we able to produce everything in house, we are still able to offer highly competitive prices.
Website http://frameusa.com/