“In December of 2010, Dan Regenold, CEO of Frame USA, had a vision; to fill an entire 53′ foot semi-truck for a local charity. He knew this would be his biggest charitable giving project and he would need a team to assist him. He put together a team of giving coordinators consisting of: packers, donation collectors, marketing professionals and more, to help coordinate this massive event in under 30 days. By the end of December, Frame USA ended up needing a second truck because they over filled their semi by 7%. This resulted in 833 boxes and over 30 skids equaling more than 22,200 donations!

The truck didn’t stop there. To Dan, the truck represented hope, life and a second chance for people within his community who were down on their luck. It was at this point that the truck became a catalyst, ultimately giving birth to what is now called Fill The Truck.

In 2011, Frame USA expanded the Fill The Truck charity initiative to partner with 9 businesses to host a total of 8 trucks and/or storage units throughout the greater Cincinnati, northern Kentucky and southern Dayton area. Each business hosted a truck and collected donations for a local charity. In 2012, Fill The Truck hosted 6 trucks at 6 different locations.

This year, the 2017 vision is to fill multiple trucks and provide substantial donations to each charity. We have partnered with 17 different businesses and corporate partners to donate items to seven great charities.

We are collecting donations to Fill The Truck. Even just basic things such as toilet paper, personal care items, winter clothing and bedding can have a profound impact for those who are in need. Please consider donating an item today through our website.”

To help with the vision, Frame USA will be donating to Fill The Truck in appreciation for your online order for the month of December. 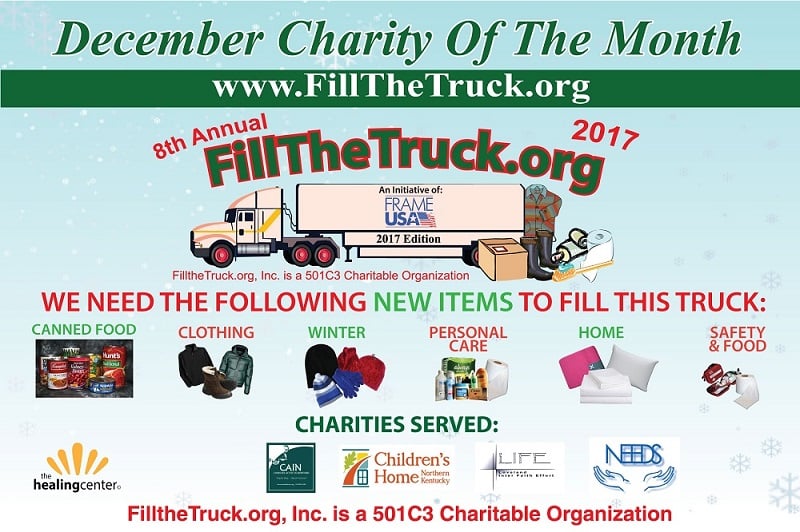